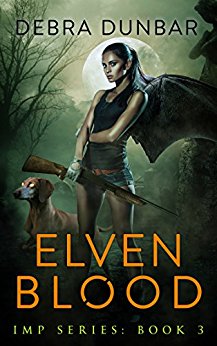 Samantha Martin is an imp, a lesser demon from Hel. She has been living under the radar, posing as a human for the last 40 years, but now that she’s bound to an angel and holds the title of Iblis her life is. . .complicated.

Sam has become buried in angelic bureaucracy, saddled with a succubus house guest, and is fighting off a never-ending slew of demon hit-men. The powerful demon, Haagenti, won’t rest until she’s dragged back to Hel for “punishment”, and he has put a substantial price on her head – a price that threatens not only her, but the human she’s grown to love.

When an elven lord offers to take care of Haagenti in return for tracking down and killing a demon half-breed , Sam thinks she’s found the solution to her most pressing problem. But finding and retrieving this hybrid monster isn't proving easy and time is running out.