It’s here!  The fourth book in the Imp Series is scheduled for an early release of August 15th.  DEVIL’S PAW: 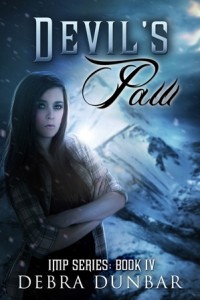 For once no one wants to kill Samantha Martin.  She’s free to do all the things a mischievous imp loves to do- like remove all the county speed limit signs, and wrap City Hall in crime scene tape.  Her only worry beyond organizing the delivery of her boyfriend’s birthday present is writing those pesky four nine five reports for the Ruling Council of Angels.  But imps can never stay out of trouble for long.

Demon corpses have been found drained of all energy, their spirit selves ripped clean from their bodies.  Sam’s angel, Gregory, considers her a prime suspect, so when an angel is discovered dead in the same manner, he drags her to Seattle and Juneau to try to clear her name.  The race is on to find the murderer before Sam’s secret is exposed and she’s blamed for the deaths.  But is a devouring spirit really the killer, or is there more to the deaths than either Sam or Gregory suspect?