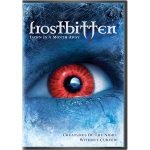 Tired of those sparkly, emo vampires?  The brooding ones that would rather play hide the salami than bite someone in the neck?  Journey beyond the confines of Hollywood and experience a Swedish film full of dark humor, and more chewed up bodies than a tank of piranhas.

The movie starts out with a flashback from WWII.  A group of German soldiers are separated during battle and end up trudging through a snow packed woods, before sheltering at an abandoned farmhouse.  But the farmhouse isn’t abandoned, and the soldiers find themselves attacked at night by wall climbing creatures that rip their throats out.  Fast forward to modern times.  Annika  and daughter, Saga, have moved to a small town in northern Sweden, where Annika is excited to be working as a doctor in a hospital with eminent geneticist Gerhard Beckert.  But Beckert has secrets.  Sounds serious?  Well it might have been were it not so darned funny.  There’s creepy Bekert, earnest Annika, and there is an entire box of stolen pills that wind up at a house party, turning drunken teens into bloodsucking vampires.  Really funny drunken teenage vampires.

I was really looking forward to this film, not just because I’m a huge fan of non-US film.  Sweetie knows the director, and has spoken highly of his work.  I wasn’t disappointed.  Frostbiten was a great mix of camp and gore, fright and funny.  What better place for vampires than a town where dawn does not come for an entire month.  Woohoo!  One whole month of darkness to chow down on as many poodles, and humans as a fanged-one can.  There’s some nicely done CGI, and special effects, which you usually don’t see in films outside the U.S.  My absolute favorite part was Sebastian’s nightmare of a dinner with his girlfriend’s parents where he realizes the pill he popped earlier that evening has turned him into a vampire.  Hide the family pet rabbit!  And that garlic sauced trout?  Not a good entree choice.

Five stars.  And if you’re ever being chased through the front yard by a vampire, make use of the garden gnomes.  Just saying.