Mistress of the Universe 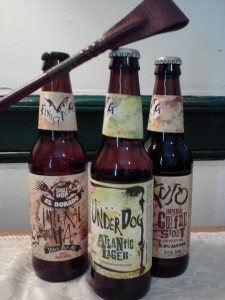 Sweetie is good buds with all the Flying Dog Brewery folks.  He’s a member of their elite Junto club, goes to their various events.  He was even invited on one of their management retreats this fall.  So when Flying Dog put out an e-mail promoting their Masters of the Universe series of seminars, I signed myself up.  Solo.  All alone.  Just me and a room full of strangers drinking beer.  Sounds kind of like nightlife back in my 20’s.

The Flying Dog people put on a rollicking good show.  They’re silly, irrelevant, out there.  Any brewery that has a beer titled Raging Bitch ought to give you an idea of their overall philosophy.  The Master’s club would be 40 members throughout the year, with 10 additional contest-winning attendees each month. So in I strolled, Tuesday night, ready to learn to grill the perfect burger and drink some beer.

Now, admittedly, I was in a wacky mood, so I brought a riding crop.  I mean, if I was going to be a Mistress of the Universe, I needed an accessory.  This one wasn’t my favorite crop, but it came in close second.  A good two feet long and black, with an imprinted brown leather handle and shiny silver caps and end.  I strode in with it tucked beneath my arm, and registered.  Not a comment.  I walked through the packed room, asked a table of eight men if I could join them, then plopped my huge crop down on the table in front of me.  Not a word.  Not even a nervous glance.  Everyone cheerfully introduced themselves, and I sauntered up to the bar to grab a beer, keeping the crop in the corner of my eye to see if anyone picked it up and examined it.  Nada.

As I suspected, the membership was overwhelmingly male.  I was one of five women, and the other four appeared to be there in with a male partner.  Tom and I discussed homebrew and his love of off road motorbiking.  David and I chatted about his eight year old daughter.  Frank and I compared the merits of various beers and waxed poetic about the burgers.  The CarterQue folks were there, teaching us how to grill the perfect burger, and I picked up a few tips which I’ll be happy to demonstrate this summer during a festive cookout.

Finally, after almost an hour of food and beer, David tentatively asked me about the crop.