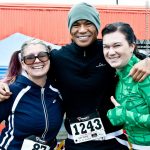 That’s right.  A mud run in November.  I’ll admit I had a few reservations the week before when we battled the outer edges of Hurricane Sandy, then were hit with near freezing temps.  A cold, wet 5k didn’t seem all that enticing, even if there were zombies.  But when I shell out $80 for something, I’m gonna be there, so I slapped on three pairs of running tights, two Coolmax shirts and a poly running jacket and off I went.

My friends Amanda and Josh were running with me, and both Sweetie and friend Lauren were tagging along to spectate.  Sweetie brought his impressive camera, and we all shared a pre-race beer.  I know that sounds strange, but given the nature of this race, I figured alcoholic fortification was in order.  Amanda, the mud run pro of our crew, expressed a desire that we all stick together, marine style, but also announced that if she saw a zombie, she was outa there.  Zombies = every runner for him/her self. 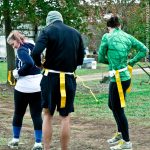 And let me tell you, there were zombies stinking everywhere.  We barely got past the goat pen and they were on us. Clearly whatever medical crisis caused this walking dead epidemic, it was far reaching.  The race was 3.12 miles of sprinting and dodging.

The night before I had dreamed of this race.  I’m an MBA, so my nightmares aren’t like normal people’s nightmares.  They tend to be about spreadsheets and not being able to connect to LiveMeeting.  In my pre-race dream, the zombies were allowed to come right up to the mud race obstacles, creating an unfair advantage.  Runners needed to go over these obstacles, and weren’t able to effectively dodge the zombies at the juncture.  In my dream, I railed against the race organizers for this oversight.  I also dreamed that other runners were stealing the “life