One Imp to Rule Them All 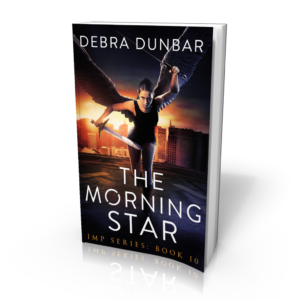 The final book in the Imp Series is now available, and I’m a bit of a wreck over it all. I’ve loved bringing Sam’s antics to life. Six years ago I published A Demon Bound, and it’s been an amazing ride. But as much as I want to write other books and worlds to share with you all, it’s so difficult to close the door on a series that’s so close to my heart. Know that Sam will have cameos in new upcoming Imp World series as well as some short stories and novellas of her own, but this next year is going to be devoted to bringing you my amazing White Lightning Series, as well as four new novels in the Templar series. I’ll also be putting out some short fun paranormal romances early next year. The Imp World will continue late 2019 with a new series, Poseidon’s Daughter—which will be set in Chicago with Dar, Asta, and some new characters you’ll love. And yes, Sam. She’ll be making an appearance in book 1 as well as some of the other books in the series.

So, without further ado, here’s The Morning Star. I hope you enjoy reading it because I sure as heck enjoyed writing it.