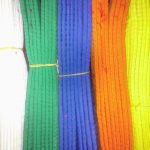 Yes, I am officially insane.  At 47, I’m trying out Brazilian Jiu-Jitsu without any previous martial arts training.  It’s a good workout.  It’s amazing research for in-fighting techniques for my writing.  It requires me to think, plan, use my weight and body position in surprising ways.  Fun stuff.

Last Friday, our instructor emphasized that position needs to take priority before you ever even think of going for the submission of your opponent.  Position before submission.  It struck me like one of those proverbial bolts of lightning.  I’d failed several times while grappling in that very class to close the deal because I’d rushed it.  As my opponent rose to his knees, I would go for a hold early, fearful that if I waited I wouldn’t have enough time before he seized advantage.  Because of this I had my hand in at an angle, and no matter how great I finished the move, that angle meant I didn’t have enough leverage to finish the choke hold.  I’d lost my advantage because I’d pushed for the close before I’d ensured a good position.

How many of us rush our self-published books to market and realize too late there was work we still needed to do?  How many software products (big guys not excluded) get shoved into market in an attempt to be an industry leader, only to need twelve patches within the first year?  We rush everything trying to be first out of the gate, to get ahead of the trends.  Mixing metaphors here, but the leader out of the gate in the horserace usually loses at the finish line.

There were a lot of things to think about in the move we were practicing that day.  Body weight, stance, control of opponents arm and leg, grabbing at the right time and at the right angle, bringing in the elbow while shifting weight.  And when all is in place, dropping weight back over the hip to the ground and moving the combination of wrists and hip to complete the hold and gain submission.  We were practicing, and it was still difficult in slow motion to get everything in the correct place before dropping to the finish.  In the real world, this move would have taken no more than two seconds.  And it would have all been wasted without securing the correct position first.

We have more than two seconds.  In our novels, in all of our products, take the time to ensure everything is in place before going to market.  Otherwise you’ll find yourself on your back trying to win by brute strength and endurance alone.  And that’s an exhausting, costly scenario no one can gain from.