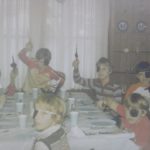 Today is International Talk Like a Pirate Day.  Maryanne Wells proposed that we writers all blog on piratical themes in honor of the holiday, sort of like a blog tour without the scurvy, peg legs, and weevils in our hardtack.  So in the spirit of pirates everywhere, I present you, my reader, with this true story.  True, at least, by my recollections.

It was January, 1979.  I was a 13 year old girl full of teen angst and moody depression.  Skinny, with braces and a body that stubbornly clung to pre-pubescent shape no matter how hard I prayed and how many padded bras I wore.  I had a brother.  A six year old brother, to be exact.  One that liked to hide behind the sofa and spy on me and my friends as we gossiped about cute boys.  One that ate the chocolate off all the chocolate covered donuts and put them back in the box.  One that got up at five in the morning and watched the test pattern on the television so he wouldn’t miss that early morning episode of Ultraman.  That little brother was turning seven, and there was going to be a birthday party.

For the occasion, my parents had gone all out.  Games, party favors.  And the theme was. . . Pirates.  Yes pirates.  In northern Indiana.  In January.  With a dozen seven year old boys.

Now some of you from more temperate climates might not understand the significance of winter in northern Indiana.  It’s cold.  Bone chilling cold.  Cold, damp, and windy.  It was typical to have a few days in January where the temperature, with wind chill factored in, would be seventy below zero.  That’s 70 degrees Fahrenheit below zero.  Freezing is 32 degrees above zero, for your Celsius kind of people.   Schools shut down.  We closed off all of our house except for a few rooms, lit the fireplace, and sometimes even turned the oven on and opened the door.  That’s not all.  We have this lovely thing called “lake effect