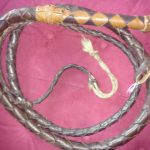 The ABCs of Erotica – D is for Domination – by Malia Mallory

This erotic short starts right in the middle of a sexual scene between Mistress Ven and her unnamed male submissive.  The scene is nicely done, complex with quite a lot of toy usage.  Moderate punishment, clamps and other devices, delayed release, are just a few of the elements.  Mistress Ven distances herself from her submissive, only allowing him some slight glimpses of her cleavage, and rarely touching him, this makes the few touches she does give very meaningful.  They are clearly very experienced and comfortable with each other.  Mistress Ven comes across as attentive, and kind, which is not easily done in a story with this level of distance.  The reader clearly sees the appeal for the male submissive, and his absolute devotion to Mistress Ven.  Very sexy, and well written.

Mike and Vicki’s marriage has grown stale, and she’s thinking of divorce when a friend suggest she try to save the relationship by spicing things up in the bedroom.  Looking for ideas that might appeal to her husband, Vicki checks out his favorite internet porn and is surprised to see every last bit of it has a theme of female domination.  She discusses it with Mike and they agree to explore his fantasies.  Vicki does her research, chats online and in person with a local, experienced domme, and is a bit surprised to find how much she enjoys being in control.  I like how the couple discusses the logistics around when and where, and how far her domination will go in their day to day lives.  I also like how Vicki checks in with Mike to make sure she isn’t going too far, or not going far enough!  I do want to let readers know that Mike is into pain, and a few chapters show some intense punishment and humiliation.  Mike assures Vicki that he really wants things to go this far, and it takes a truly dominant woman to be able to give a man what he needs at this level.  The writing is somewhat flat, dry and stiff (no pun intended), but the set up and details are good.  Not a story for everyone, but for those looking for something beyond light BDSM with a female in control, this might appeal.