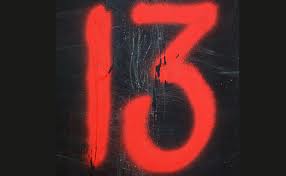 Welcome Debbie Christiana, my guest blogger today discussing the history behind the much maligned number 13 (second only to my favorite – 42).  Debbie’s short story in Beltane: Ten Tales of Witchcraft was one of my favorites, and an exerpt follows her post.  Take it away!

Hi, Debbie. Thanks so much for having me as your guest today.

With Halloween behind us, I thought I’d talk about another fascination I have – the number 13 – and how it inspired my short story in BELTANE, The Thirteen Steps.

I was born on Friday, October 13th, and have always been intrigued on how and why it has such a bad rap.

Thirteen wasn’t always a considered a naughty number. Those who study numerology will be the first to tell you it’s a prime number, divisible by only itself, which reflects integrity, purity and incorruptible nature.  For some unexplained reason, the number thirteen is lucky in Italy. Flash a number seventeen at an Italian and they will run for the hills.

Then religious superstition, myths and legends got the better of poor number thirteen. Many believe it started with Freya, Norse Goddess and wife of Thor. She threw a banquet and the thirteenth guest, Loki, the God of Mischief, crashed the party causing havoc and, well, mischief.  Jesus had the same unfortunate number of guests at his last supper.

Other say it was because the monks who were in charge of calendars in ancient times had problems when a year had thirteen full moons instead of twelve. It upset the normal arrangement of church festivals. What could they do except declare thirteen a ghastly number?

Things soon deteriorated for my favorite number. The first time it was mentioned there were thirteen witches in a coven was in 1662. Isobel Cowdie, a Scottish woman went to trial for witchcraft. Witnesses described her coven as having thirteen members. It stuck, but it’s not necessarily true. Some covens have thirteen, others less and others more. Many witches are solitary, but it’s a number that is still associated with witches. It’s thought anything less than thirteen knots in a hangman’s noose won’t break a person’s neck (the jury is still out on this) and, there are thirteen steps to the gallows.

All these negative connotations, and there are plenty others, were given to thirteen before the unlucky day of Friday was even attached to it.

The Thirteen Steps is a combination of some of the trivia from above, my Sicilian grandparents who would speak of the Stregas, or Italian witches in their village and my interest in Stregheria, referred to in Italy as La Vecchia Religione or the Old Religion.

Isabella is a Sicilian Strega falsely accused of consorting with the devil.  One hundred and thirteen years later, she returns seeking justice, or is it revenge?

I’ve included a short excerpt. I hope you enjoy it.

The thirteen wooden steps to the gallows creaked beneath Isabella, moaning a dismal welcome to the top.  The village of Messina, Sicily hadn’t hung a witch in over three hundred years.  At the height of the Spanish Inquisition, Sicilians showed tolerance for those who practiced the ancient religion of Stregheria, but today that would change. With her hands bound behind her, Isabella walked to her death.

She peered into the crowded sea of spectators below and fixated on her accuser- The Visconte of Sardinia.  He stood tall, his broad chest proclaiming self-importance.  Beneath the smug, arrogant expression, a longing lingered in his eyes. She refused his advances to have her in his bed. Isabella invited men she found desirable to share her love, not the other way around.  Now she would pay for it with her life.

“My heart is heavy with sorrow that after years of practicing the ways of the Strega with honor,