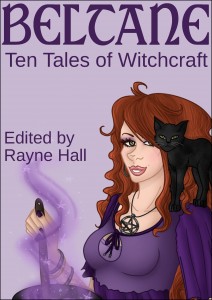 Today I have a post from guest-blogger, Karen Heard on writing and research.  Karen’s short story, Alba, is also in Beltane: Ten Tales of Witchcraft (as is mine!).  I loved her imaginative take on elemental magic and witchcraft in the story’s murder mystery plot.  Spooky and fun!

When Debra invited me to write a blog post on my new story ‘Alba’ she suggested I mention the research I’d conducted. When I told her that actually I hadn’t done any, I felt a little like a fraud. Research for me usually involves spending months beforehand background reading or visiting the locations to touch the walls, smell the air, find places to hide bodies. The first draft of Alba had only taken half an hour to write, in a flash of inspiration, and I had drawn only on facts I already knew. But then as I looked over the story again, I realised that I had actually done lots of research – only not initially for this story!

What I had included, without really thinking about where the knowledge had come from, was details on how a murder investigation is handled by the police. I hadn’t needed to research this for Alba as I had done a lot already for a crime novella I’ve been writing for a couple of years. The detective in Alba, in fact, was borrowed from a character in this novella – so you could argue that Alba had a good two years worth of research behind it.

I had also included a scene in Alba where my detective uses a Bloodhound to find a dead body. I already knew that police use trained Bloodhounds to hunt specifically for dead flesh from research I had done for another novel about a sniffer dog detective. Unfortunately, the bit of research I didn’t do before starting my dog detective story was to check for similar books already written. This was before the cat/dog detective boom in literature, but there were already enough out there for me to abandon that book quicker than you can say ‘cliché’. After the project fell through, I was glad to be able use at least one of the facts I’d learned to put into Alba  –  that fact represented another years’ worth of research.

On top of that, I also remembered that I had done a few weeks worth of fact checking during my second draft of Alba, to look up all of those details I had picked up from anecdote or on TV, or other now-forgotten source: such as the fact that in the UK you go to a ‘morgue’ not a ‘mortuary’; the hearing that occurs in suspicious deaths is called an ‘inquest’; the word ‘effigy’ mean a representation of a person; the main property of a rose quartz is said to be unconditional love; people who practice the Wicca religion are called ‘Wiccians’ (thank you Rayne Hall for this fact) the name ‘Alba’ means ‘white’ in latin (which I used to evoke my main character’s albino looks). I had already heard, in real life, of people dying from a temperature and from water in the lungs so again, I just needed to spend a few hours reading up about how this could happen and what would occur to make sure that what I’d written in my story was accurate.

I can’t pretend that everything in Alba is factually correct. In fact, I purposely used a made up form of witchcraft in my story to avoid getting things terribly wrong.

However, what I hadn’t really thought of before was how all of this old knowledge I’ve collected over the years goes into each piece of my work. When I think of it this way, for a writer, everything we do can feed into our stories. So we’re constantly researching. So maybe rather than my story taking half an hour to create – really it’s taken me a lifetime.

You can read Alba in Beltane: Ten Tales of Witchcraft: