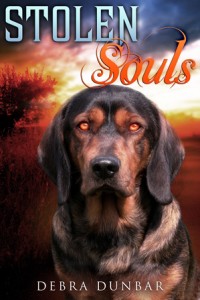 I’m thrilled to show you all the cover for STOLEN SOULS (March 2014)!  I have to say, it’s one of my favorite covers so far with the lovable hellhound, Boomer, front and center.  Here’s the description:

Nyalla is dog-sitting for Satan.  It’s a sweet gig for a girl who, up until recently, had been a slave to the elves in Hel.  The house is amazing, she’s got the key to the Corvette, and although Boomer is a Hellhound, he’s also a lovable, slobbery companion.

When a newly interred corpse vanishes, followed by a series of grisly murders, Nyalla can’t help but wonder if Boomer’s odd diet has taken a deadly turn.  Could the dog be to blame or is there a more sinister creature on the loose?  Nyalla must stop who is behind it all before more die – and before the county puts Boomer on death row.