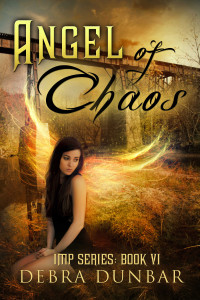 Well, technically it’s not a cover reveal since my banner has it off to the side, and my impish Debra’s Demons couldn’t restrain their enthusiasm.  But here it is – one of my favorite covers by Phatpuppy Art and Bookish Brunette.

Samantha Martin didn’t want the title of Iblis and all the hellish responsibility that comes with it.  She sure as heck didn’t want these feathery angel wings permanently affixed to her back– although those have their perks.  She especially doesn’t want all the extra projects the Ruling Council keeps dumping on her plate.

Tricked into protecting a pregnant woman, Sam discovers that her hasty vow came with a whole lot of strings attached – strings that make her question her trust in Gregory.  In order to keep her promises, she’ll need to rely on old friends as well as a house full of unlikely allies.

As if that weren’t enough chaos for an imp, the angels finally find proof that werewolves are Nephilim – the descendants of fallen angels. An entire race is facing extinction and their only hope for salvation is an angel from Hel.

Now for the GOOD NEWS/BAD NEWS

I never know which to reveal first, so in the spirit of ripping off the band-aid (or duct tape), here’s the Bad News:

Angel of Chaos will be late.  I’d hoped to have it available by the end of August, but the official publication date is October 13th.  It’s shaping up to be a great book, and if it’s ready earlier, I’ll release it early.  I’ll also put it up on iTunes for pre-order by late-August, as I’ll know by then if an early release is possible.

I know I’ll wind up naked and restrained in Aaru for this one.  Hopefully Gregory will keep me company.

Good News: There will be four more Imp Series books.  Four.  They’ll feature Sam and Gregory, tackling Big Problems together.  I’ve already done the photo shoot and have all four covers designed, and WOW are they amazing!

Hopefully that mitigates my punishment a bit.  Do you think Gabriel will take it easy on me?